The Capital Planning Program coordinates resources to restore, improve, and build San Francisco’s public infrastructure. Major deliverables include the 10-Year Capital Plan, the annual Capital Budget, and the administration of the Capital Planning Committee. This work helps San Francisco live up to its commitment to building a more resilient and vibrant future for the residents, workers, and visitors of San Francisco.

Produced every other year, the Capital Plan describes the City’s major sources for infrastructure and the major programs and projects planned for the next 10 years. The FY2022-31 Capital Plan was adopted by the Mayor and Board of Supervisors on April 20, 2021.

Issuing debt is a typical method for financing capital enhancements with long useful lives and high upfront costs which the City would not be able to cover through the Pay-Go Program. The use of debt also spreads the financial burden of paying for facilities between current residents and future generations who will also benefit from the projects.

For planning purposes department-level allocations have been assigned in this document for all planned G.O. Bond and COP programs. These allocations are subject to change and will be refined prior to approval from the Capital Planning Committee based on information from Citywide needs assessments such as the HAZUS analysis described in Chapter Four: Building Our Future, as well as evolving department priorities.

San Francisco has long been a city resilient in the face of environmental, economic, and social challenges. Our infrastructure needs span facilities, streets, pipes, transportation, trees, parks, and more. The Capital Planning Program guides infrastructure investments and builds public trust in the City’s ability to do smart long-term planning across major programs including those featured here.

Auxiliary Water Supply System
An additional layer of fire protection in addition to the domestic water system in the event of a major earthquake.

Mission Bay Ferry Landing
Providing regional ferry service to and from one of the fastest growing neighborhoods in San Francisco. 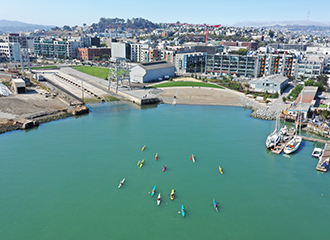 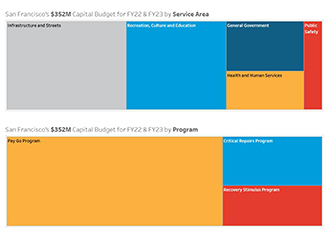 The $352 million FY2022 & 23 Capital Budget addresses facility renewals, annual maintenance and other needs across the city. 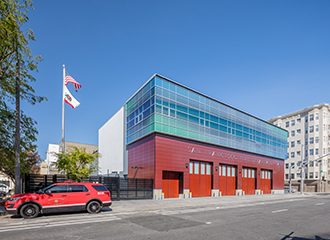 One of the City's major G.O. Bond programs, the ESER program identifies seismic improvements and upgrades to City-owned facilities that are needed to help safeguard San Francisco. 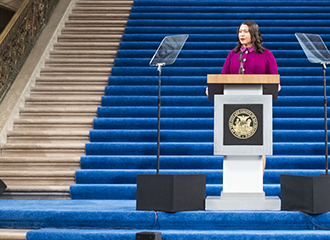 The Five-Year Financial Plan, released by the offices of the Mayor, Controller, and the Board of Supervisors, projects that the City’s revenues will recover over the next five years as the City recovers from the economic impacts of COVID-19.